立即购物
About Apple iPhone 3GS
eBay has provided more information about this product above and is not affiliated with or endorsed by Apple. 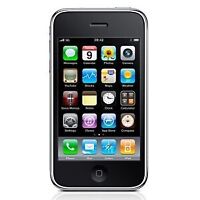 The Apple iPhone 3GS is the third generation of Apple's iPhone series and a successor to the iPhone 3G. First released on June 8, 2009, this smartphone improves on the basic iPhone design. It also runs on the Apple iOS operating system.

What are the features of the iPhone 3GS?

The iPhone 3GS contains both a 32-bit 600MHz processor and 256MB of RAM. The rear-facing 3MP camera, featuring an improved resolution, is capable of photo and video geotagging, 5x digital zoom, auto-exposure, and both an auto-focus and tap-to-focus feature. The camera can also capture video at 30 frames per second.

In addition to being capable of Wi-Fi connectivity, the iPhone 3GS also supports Bluetooth 2.1. It can connect using either tri-band or quad-band wireless connections. The voice-control feature allows you to control the phone purely through voice commands by speaking into the microphone. This phone measures 4.5 inches by 2.4 inches, and it weighs a little less than 5 ounces.

What kind of display is built into the iPhone 3GS?

The iPhone 3GS features a 3.5-inch LCD capacitive touch-screen display at a resolution of 480 x 320 pixels. The smartphone is controlled entirely through swipe, tap, and pinch gestures on the screen. You can also change the orientation of the screen by rotating the phone on its side. The screen contains an oleophobic coating that is resistant to dirt and fingerprint smudges.

What kind of sensors and extras are in the 3GS?

The iPhone 3GS features a three-axis accelerometer, a digital compass, a proximity sensor, and an ambient light sensor. In addition, the 3GS has a built-in magnetometer, which can measure the strength and direction of the magnetic field. The phone's digital compass points in the direction of the magnetic field, which can come in handy when you need to find your way in an unfamiliar place. The iPhone 3GS also features a glossy plastic backing with tapered edges and metal buttons. The phone has a home button, a sleep/wake button, volume controls, a single speaker, and a ring/silent button.

How long is the battery life of the iPhone 3GS?

The iPhone's lithium-ion battery varies based on the amount of power being drawn at any given time. For example, it can play 10 straight hours of video and 30 hours of music. It also lasts 300 hours on standby. When you are using the wireless connectivity, the phone lasts for up to nine hours on Wi-Fi, 12 hours on 2G, or five on 3G. The phone can be charged through a compatible power adapter or USB charging cable. The battery retains about 80% of its original capacity after 400 full-charging and discharging cycles.